There is a very healthy market for primers. These guides, typically a combination of a manual and a textbook, are designed to simplify complex documents. Whether written to explain the tax code, the U.S. Constitution, or a software program, primers have become a useful, although frequently maligned, genre. During the past decade, The Complete Idiot's Guide has produced a remarkably popular series of introductory primers on a wide range of topics. The books are designed to be a basic introduction to subject matter unfamiliar to its target audience. Slowly, these books are appearing on the shelves of students, professionals, and even professors who find the books useful and highly informative. An earlier entrant into the Idiot's Guide series on parliamentary procedure was written by Nancy Sylvester. The Fast-Track series, however, is designed to be shorter and less in-depth than the regular books in the Complete Idiot's Guide franchise. 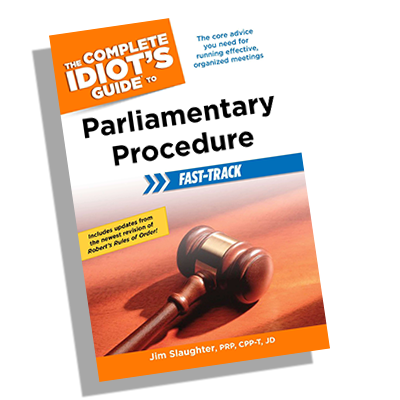 This new Fast-Track book is written by Jim Slaughter, and it is less than half the length of Sylvester's book. It is targeted at the introductory level, and it is geared to explaining the eleventh edition of Robert's Rules of Order Newly Revised (RONR 11). As the author writes in the introductory section, the book is not "an exhaustive treatise on every motion you can make at a meeting . . . the book . . . is designed to get you up and running for the next meeting as quickly as possible. In other words, it puts you on the fast track to mastering the basics of parliamentary procedure." Slaughter acknowledges that much of Robert's Rules is designed for large membership meetings or conventions, and he is particularly concerned with relating parliamentary principles to other organizations such as condominium and homeowner board meetings, city council and school board events, and non-profit associations.

Slaughter's book combines his experience as an attorney and author with his work as a parliamentary consultant and teacher. Among his clients are the AFL-CIO, the National Air Traffic Controllers Association, the National School Boards Association, the Oncology Nursing Society, the United Food & Commercial Workers, and Microsoft Corporation. Slaughter, a certified parliamentarian, also maintains a helpful website on parliamentary procedure, and he has served on the faculty at the Riddick Parliamentary Procedure Practicum in Williamsburg, Virginia, and the Thais M. Plaisted Memorial Parliamentary Procedure Practicum in Pomona, California.

What is most surprising about the book is, despite its brevity, how comprehensively it covers of the main topics in parliamentary procedure. In fact, this book is likely to provide one-stop shopping for readers who are required to preside at meetings or who want to understand the dynamics of parliamentary activities. In twelve chapters and two brief appendices, Slaughter intelligently summarizes the fundamental concepts of parliamentary procedure, the key motions, voting, and the duties of an officer; he also addresses other issues necessary to make an organization run efficiently. This is a straightforward, meat-and-potatoes approach. There is not a lot of scripting of conversations, cartoons, or charts. At the same time, each of the chapters contains several types of sidebars such as parliamentary pointers (tips), important definitions, and "out of order" observations that highlight mistakes that may develop at a meeting. Slaughter is very practical, and this trait is repeatedly illustrated in his ideas and outlook on how to conduct an effective meeting.

There are three important characteristics of the book that are worth noting. First, the tone of the book is conversational as if the author were talking through the process in the reader's living room. The overall effect is warm and inviting, and there is an occasional humorous aside in the text (such as labeling Robert's Rules as "the 800-pound gorilla of the parliamentary world"). Slaughter provides, above all, a coherent explanation of Robert's Rules of Order, highlighting the fact that only one-third of the book deals with deliberations over motions. Second, Slaughter provides straightforward strategies on which rules to pursue for a specific setting. He acknowledges that levels of formality differ among organizations, and which rules also may differ depending on the bylaws and the nature of the group. Moreover, he is very clear without "dumbing-down" the information, and this clarity is the dominant characteristic of the book. Third, Slaughter does an excellent job on topics likely to befuddle average readers such as the recording of minutes, voting, and a teller's report. He also provides tips for handling disruptive members and tyrannical chairs who may desire to manipulate the proceedings.

Overall, this is a useful and very instructive work. It is a primer worth recommending as a text to novices and veteran presiding officers. The goal of this book is to help the reader conduct a shorter, fairer, and more orderly meeting as well as to understand the dynamics of meetings. In fact, this primer is likely to be the signature brief guide to efficient meetings for the next decade.

Donald Fishman, Ph.D., Northwestern University, is the assistant chairman of the Department of Communication at Boston College. He is two-time recipient of the Phifer Award for Outstanding Scholarship in Parliamentary Procedure. This review of Jim Slaughter's The Complete Idiot's Guide to Parliamentary Procedure Fast-Track is reprinted with permission from the Fourth Quarter 2012 National Parliamentarian.